Reduced chances of a “no-deal” Brexit also played its part in improving investor sentiment as Prime Minister Boris Johnson seems to have negotiated most of the many hurdles to an orderly exit from the European Union. A “no-deal” withdrawal is not completely ruled out however as the newly elected parliament (following the 12 December elections) will still have to pass a new version of the Withdrawal Agreement Bill before the 31st of January 2020. On the back of these developments Pound Sterling strengthened more than 5% against the greenback in October.

The US Central Bank has cut interest rates for the third time this year in an attempt to keep the longest running period of growth in the country’s history continuing into the crucial election year of 2020. In a statement explaining the decision, chairman Jerome Powell said unemployment had remained low and household spending had been growing strongly, but business investment and exports had remained weak. Inflation was below its 2% target. The Federal Reserve put itself on a potential collision course with Donald Trump when it signalled to the financial markets that it had no immediate intention of cutting the cost of borrowing further. Trump has put intense pressure on the Fed to boost the world’s biggest economy and his own re-election prospects by making aggressive cuts in the cost of borrowing. Powell however said there was a limit to what the Fed could do and that a more effective way to stimulate activity would be for Congress to loosen fiscal policy through spending increases or tax cuts.

The New York Times reported that China’s economic slowdown worsened in the July to September period as the trade war with the United States, along other problems, leave Beijing struggling to meet its goals. The figures show China continues to grow at its slowest pace in nearly three decades of modern record-keeping. While China is still expanding faster than any other major economy, the latest data suggest that the pace could come in at the low end of Beijing’s official target, which could add to worries about broader prospects for global growth. China's efforts to tame its addiction to lending and the deepening impact of the trade war have been major drags on the economy. Other problems are worsening, as the country’s vast automotive sector shrinks, its real estate sector levels off and as its pigs die in vast numbers from a swine fever epidemic. China’s economic output grew 6 percent in the third quarter compared with a year earlier. This is at the bottom end of Beijing’s full-year target of 6 percent to 6.5 percent.

According to a recent report from Macro Research Board even moderate economic growth in 2020 would provide support for global equities and other growth assets and push bond yields at least modestly higher. On the positive side, Europe has the potential to surprise on the upside. The next six to twelve months are likely to remain volatile on the back of US election campaigning, developments around Brexit and the state of various conflicts in the Middle East, but there is not enough evidence to reduce exposure to growth assets yet.

South Africa
Against a backdrop of a sobering medium-term budget policy statement (MTBPS) and a deterioration of Moody’s outlook to negative, the Springboks did their best to change investor confidence by lifting the Webb Ellis Cup in Yokohama on 2 November.

Captain Siya Kolisi’s remarkable journey from a dusty, poverty-stricken township on the eastern coast of South Africa to World Cup-winning captain, added gravitas to the occasion. He finished his post-match interview with these poignant words: “…we can achieve anything if we work together as one

This is, indeed, what is required to address the realistic, but taxing picture painted by finance minister, Tito Mboweni, when he delivered the Medium-Term Budget Policy Statement (MTBPS) on 31 October. According to Stanlib Asset Management, it attracted more attention than any other delivered, since 1997, due to the intense pressures now evident on government finances. The minister presented a sobering update of SA’s fiscal parameters, with clear evidence of a further sharp deterioration in government’s fiscal position. The weak economic environment, a further revenue shortfall and the additional funding requirements by state-owned enterprises (SOEs) meant that National Treasury was always going to have to report further fiscal slippage. However, the extent of slippage announced by Minister Mboweni exceeded most analysts’ expectations. Unsurprisingly, the rand weakened, and bond yields rose.

Ultimately, there is no substitute for higher economic growth in resolving South Africa’s unfolding fiscal crisis. Furthermore (and this is where Captain Kolisi’s words ring particularly true), this can only be achieved through a concerted and coordinated effort to lift business and household confidence to improve private sector fixed investment, skills development and productivity.

Against this fiscal and economic backdrop, it’s not surprising that valuations of “SA Inc” companies are at multi-year lows. Conventional wisdom dictates that the bad news is priced in and any surprise, however moderate in nature, could lead to significant returns from investments in locally focused companies.

The South African Reserve Bank’s Monetary Policy Committee (MPC) left interest rates unchanged during their September meeting. Governor Lesetja Kganyago announced that “…monetary policy actions will continue to focus on anchoring inflation expectations near the mid-point (4.5%) of the inflation target range in the interest of balanced and sustainable growth.

In this persistently uncertain environment, future policy decisions will continue to be highly data-dependent, sensitive to the assessment of the balance of risks to the outlook, and will seek to look-through temporary price shocks.” Expectations for an interest rate cut during the November meeting have now declined with many analysts expecting the next move only in 2020. It seems increasingly likely that it’s fiscal policy and a turnaround in consumer and business confidence, rather than monetary intervention, will be the catalyst for a resurgence in South Africa’s growth prospects.

Market performance
Financial markets had a strong month as monetary policy around the globe remained accommodative and trade tensions seem to have eased. Visio Capital reports that, in line with global stock markets, domestic equities delivered strong returns as the FTSE/JSE All Share Index moved 3.1% higher. This move was led by the resource sector (up 7.3%) which continues its spectacular run.

Domestic bond yields recorded a strong start to the month as it continued to move lower, supported by an appreciating currency and lower inflation, but spiked in the last two days of the month as the market expressed its disappointment with the solemn picture painted by the MTBPS.

Listed property (up 1.9%) recorded its best month since June but remains the worst performing asset class over the last twelve months.

Several gold shares were among the top performers in October as Sibanye Stilwater (+39%), Goldfields (+22%) and AngloGold Ashanti (+16%) led the charge. Naspers, on the other hand, of the top 60 shares spectrum (by market capitalization), shed 6.5% during the month, with Prosus giving up 5%.

Investors in balanced funds enjoyed a much improved twelve months as both low and high equity multi-asset funds beat inflation by over 2%. This follow after a sustained period where they struggled to beat cash over rolling one-year periods.

Dollar weakness against most other currencies meant that the Rand ended the month around 0.7% stronger against the greenback. It did, however, give up some ground versus the Pound Sterling (down 4.3%) and the Euro (down 1.6%).

Commentary – A practical example of geographic diversification
With so much focus on the future operations and ownership of South Africa’s state-owned enterprises it’s useful to reflect on a case study of an enterprise that was previously owned by the state and now operates as a publicly traded company.

Sasol (South African Synthetic Oil Limited) was founded in 1950 in Sasolburg, and built on processes that were first developed by German chemists and engineers in the early 1900’s. Today, Sasol develops and commercialises various technologies, including synthetic fuels technologies, and produces different liquid fuels, chemicals and electricity. It listed on the Johannesburg Stock Exchange in 1979 and on the New York Stock Exchange in 2003. For many years, it’s also been one of the largest corporate tax payers in South Africa.

If investors bought enough Sasol shares in 1979 (at R1.00 per share) so that the annual dividend covered their annual fuel bill they would have no need to pay for fuel out of their monthly income today (and have spare cash to pay for rising electricity costs…): 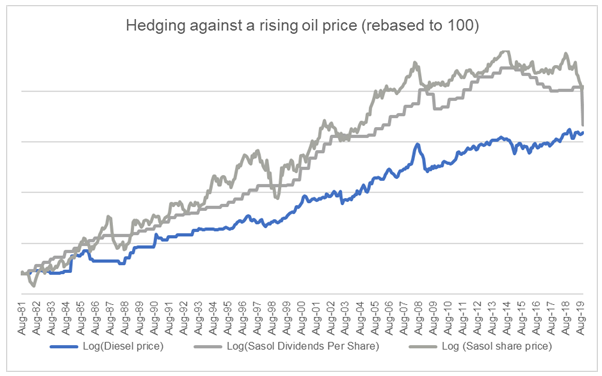 Clearly the privatisation of Sasol has had profound benefits for the country, the receiver of revenue, employees and for shareholders. An investment of R1 000 (1 000 shares) in 1979 would be worth nearly R280 000 if the investor used the dividends to fill up at the pump. This is a compound growth rate of 15% per annum. The astonishing fact is that, with dividends reinvested, this would have been a remarkable return of more than 24% per annum over 40 years. The value of your R1 000 invested 40 years later? An astonishing R6.1 million rand.

Almost all South African investors have some exposure to Sasol’s investment performance. It appears in the top ten holdings of most asset managers. With its share price halving from its 5 year high of R576 in August 2018 to around R280 at the end of October 2019, many investors are wondering what the prospects are of the share reaching those lofty levels again. The decline in the share price is attributed to the late delivery of and cost overruns at it’s very ambitious Lake Charlese Chemicals Project in Louisiana, United States.

We’ve asked a few investment managers on their outlook for Sasol, and whether it deserves a place in their portfolios.

Abax Investments believes that Sasol is oversold at current levels. Various concerns around the Lake Charles Chemicals Project (LCCP) has raised serious questions about governance and internal control processes within the company. With Sasol having now released its results, concurrently with the LCCP board review, they expect the air to clear somewhat, allowing investors to focus once more on fundamentals. In their view the stock is undervalued at R300 and deserves a position in their portfolios.

Perspective Investment Management has a long-term, contrarian approach to investment management. They evaluate each potential holding on understandability, trustworthy owners & leaders, robustness and cheapness. With three of these four measures on “positive” and one on “neutral”, they also hold the share in their balanced portfolio. They do, however, point out that their investment in Sasol forms part of their sufficiently diversified and highly liquid portfolio of opportunities and risks. One of the metrics Perspective considers, is the Sasol share price versus the Rand price of oil. The gap between these two is now the biggest since 1994:

Truffle Asset Management has a different view and has been reducing their exposure to this counter. Even though their base case scenario predicts some upside to the current share price, their worst- case scenario sees Sasol dropping to levels of R240 or below. They believe that Sasol’s balance sheet is stretched, which leaves them more vulnerable to adverse changes in the macro environment, specifically if Brent oil prices dips below $55p/b over a sustainable time period.

The important conclusion is this: the public (and their asset managers) as shareholders, holds large enterprises (such as Sasol and Telkom) to a much higher governance standard than what the state has done with Eskom and South African Airways (to name but a few) over the last decade. As has been the case with Sasol, public shareholders should demand management changes much sooner when things at the helm goes wrong. A break-up of Eskom with future private public partnerships may just be beneficial to the country, receiver of revenue, employees and shareholders. And maybe even the environment…