Continued monetary easing by central banks again dominated the headlines and market narrative during September. The European Central Bank used most of what is left of its monetary policy firepower when it opted to reduce interest rates and revert to quantitative easing again to revitalise economic growth in the region. According to a Reuters report, the ECB cut its deposit rate to a record low -0.5% from -0.4% and will restart bond purchases of 20 billion Euros a month from November. With inflation falling, Germany skirting a recession and a global trade war sapping domestic confidence, the ECB had all but promised more support to the economy and the only question was how extensive stimulus would be.  On the other side of the pond, the US Federal Reserve cut its official interest rate by 25 basis points, as broadly expected, but this also pointed to a moderate outlook for interest rates, which put a dampener on investor optimism. US President, Donald Trump, again criticised the modest reduction interest rates, wanting far more to boost the economy ahead of Presidential elections next year.

According to Sanlam Investments, geopolitics kept financial markets on edge through the month, with US-Iran relations in the balance after the US accused Iran of being responsible for a drone attack on Saudi oil fields, which slashed 5% off the global oil industry’s production. Oil prices soared in response before easing back when Saudi Aramco, the state-owned oil producer, optimistically estimated that it would take less than two months to recover the lost oil production.

An overview of the state of the global economy would not be complete without a reference to the US-China trade war. September started with the introduction of the first round of tariffs put in place by both the US and China and hopes of a tariff agreement bubbled under for the rest of the month, with a high-profile meeting due to take place between the two countries in Washington in October. Trade tensions are weighing heavily on the global economy, sentiment, and emerging markets. In late September, the news that the US may be considering introducing capital controls on US equity investing in China, upped the ante and pointed to a long road ahead for the two global superpowers.

In South Africa, there was good news on the economic front when the gross domestic product came in at 3.1% for the second quarter, all but reversing the 3.1% decline in the previous quarter. Business confidence remains under severe pressure though, and all eyes are on whether the government will actually implement Treasury’s latest economic policy plan.

The Reserve Bank’s monetary policy committee (MPC) decided, in a unanimous vote, to leave interest rates unchanged. The governor repeated calls for structural reforms to raise South Africa’s potential growth rate, saying weakness in many sectors of the economy remained a cause for concern.

In a recent Stanlib report, they note that economic growth has weakened, but the upside risks to inflation remain muted. It is possible that although key economic variables (growth and inflation) would support a further interest rate reduction of 0.25% but the SARB adopted a “wait-and-see” stance. They are concerned about the market’s reaction to the impending news about Eskom’s restructuring, the medium term budget policy statement (MTBPS) at the end of October, and the credit rating decision by Moody’s, which is currently scheduled for 1 November. This would suggest that a rate cut is still possible at the November 2019 MPC meeting, under the assumption that the upcoming economic policy announcements do not have an adverse effect on the exchange rate and government bond yields.

After a strong rebound in growth in all economic sectors in the second quarter, incoming third quarter data has been reasonable - wholesale trade and manufacturing having a positive month. However, leading economic indicators and confidence surveys are painting a grim picture. Business sentiment (an indicator for future investment) recorded its lowest level since 1999. It appears that South Africa’s economic growth could meet its projections of 0.6%. However, the focus is now moving to 2020 and 2021, which is likely to be revised lower, unless we see a significant turn in policy delivery and improvements in business and consumer confidence.

It’s clear that government’s ability to implement structural reforms and partner with business are paramount in this country’s path to economic revival.

Volatility and tough economic quarter set aside, global stock markets managed to remain in positive territory with both developed and emerging market equities managing to notch up almost 2% gains on average in dollars.

The FTSE/JSE All Share Index eked out a 0.2% gain, with Industrials (up 4.5%) and Financials (3.5%) the best performing sectors during September. The worst performers were telecommunications (down 4.1%) and Technology (-2%). Gold had a difficult September, slumping 14.9%. The main event during the month was the Amsterdam listing of Prosus, the company that now houses Naspers’ Tencent holding.

The Rand ended the month around the level it started, but this disguised a significant rally and then subsequent depreciation back above the R15 to the Dollar level by the end of the month. This was on the back of global risk-off sentiment, which adversely impacted on emerging markets in general.

The All Bond Index delivered 0.5%, while cash (as measured by the Stefi Composite Index) gained 0.6% during the month.

In last month’s commentary, we mentioned that “you should look for investment opportunities beyond your own geographical borders”, as part of a well-diversified investment strategy. Let’s consider the story of Linda.

Linda understood the benefits of diversification, and when she decided to invest for the long term in 2004, she knew that equities was the asset class with the best potential growth over the long term. She was, however, mindful of the fact that South African equities made up a very small proportion of the global universe and decided to invest 20% of her investment in a global equity fund. The rest of the investment was entrusted with a reputable local fund manager. 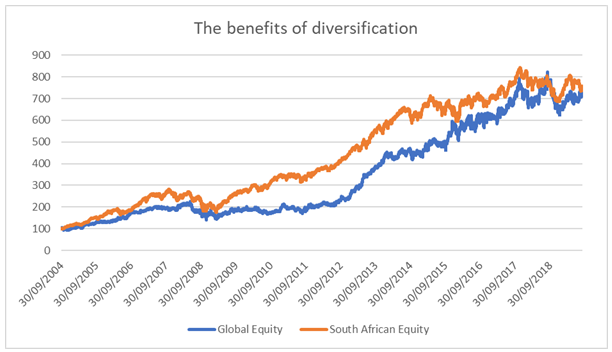 She then went one step further and looked at the rolling three year returns of each portion of the investment. She found it comforting that, when the global equity fund had its worst three-year performance of -20% (in June 2011), the local equity fund was up a whopping 35% over the same three year period.

The eventual investment outcome for the two different geographic allocations (local and global) can be explained by the exposure to equities as an asset class. Diversification across geographic locations, however, meant that the journey to the investment goal was much smoother – when one geography struggled, the other one performed well and vice versa.

The same holds true for diversification across asset classes and companies. It’s the one free lunch that investors can get, so what are you waiting for?