The United States economy is well placed to continue its expansion with acceleration in growth possible over the rest of the year. Consumer spending appears underpinned by the strong labour market and solid medium-term gains in housing and stocks and it could pick up after a somewhat subdued first quarter. There are some headwinds, notably the recent rise in energy prices, but these may be offset by the potential stimulus from the package of tax cuts, whose effects could become visible later in the year. There are also encouraging signs that the Federal Reserve seems willing to look through any temporary rise in inflation, while maintaining its gradual moves toward an appropriate monetary policy setting for the later stages of this economic cycle.

In terms of the global economy, the latest assessment of the International Monetary Fund (IMF) predicts solid global growth over the next two years. A large part of the IMF’s more optimistic forecasts was predicated on the potential boost from US tax cuts and it seems likely that increased US demand will be at the forefront of driving expansion around the world. Nevertheless, with other regions like the Eurozone and Japan still reliant on their central banks for monetary support, differentials in interest rates between the United States and the other advanced economies could continue to widen which could support US dollar strength for a little longer.

Despite recent headlines referring to a slowdown in the Eurozone, it is important to emphasize that the region continues to grow at a rate close to its maximum potential. The Eurozone’s unfavourable demographics, as well as its fragmented political and financial systems, render it unable to match the dynamism and growth potential of, for example, the United States. The current expansion seems durable though and likely to stabilise at healthy levels, mainly due to the strong domestic demand that has provided its main foundation. However, for the European Central Bank, inflation remains the primary focus and here recent data have contained little to justify an early exit from the Central Bank’s Quantitative Easing program.

The political crisis in Italy is the latest headwind for risk assets and the global economy, but ultimately the issue for asset allocation is whether the current turbulence signals the looming end of the economic expansion phase and a bear market for risk assets or is merely a correction. Our bet is on the latter, with global cash being preferred over global bonds given the direction and pace of interest rate changes around the globe.

The South African Reserve Bank’s Monetary Policy Committee (MPC) met towards the end of May and decided to keep the repo rate unchanged at 6.5%. Their hawkish statement was consistent with its growing focus of an inflation target of 4.5% (rather than 3%-6%). In its assessment, while the inflation forecast has remained broadly unchanged, the risks have moved to the upside due to the higher oil price, a weaker rand, higher electricity prices, and a reversal of capital flows to emerging markets.

CPI increased by 0.7% in April to a year-on-year rate of 4.5%. The significant bounce in inflation was due to a combination of eroding positive base effect, 1% VAT increase, and a sharp rise in the oil price. The impact of the VAT increase on inflation will only be fully reflected in the next few months, suggesting upward surprises in the near term.

Business Day reported on 5 June that the South African economy shrank by a shock 2.2% in the first quarter of 2018 compared with the final quarter of last year – with the surprisingly poor performance due to a plunge in the agricultural sector of 24.2%. This is the largest quarterly fall since the second quarter of 2009. Economists had expected a contraction of 0.5% quarter on quarter. This has put some further pressure on the rand as it moved from around R12.55 to the USD on the day to over R13.10/USD a few days later – a much weaker level compared to R11.53 at the end of February.

The strengthening of the US Dollar and rising US Treasury yields dominated market performance over the last few months. Emerging markets (including South Africa) was on the receiving end of negative market sentiment with the South African currency, equity, and bond markets retreating during this time.

During the month of May, fears that the US Federal Reserve might hike rates more aggressively than anticipated pushed US bond yields higher. The second half of the month saw increasing concerns over possible trade wars along with political unrest in Europe which sent investors back into “safe-haven” assets such as the US dollar and US bonds (which subsequently ended the month relatively flat). This risk off trade resulted in emerging market stocks and bonds underperforming their developed market peers.

In the local markets, the emerging market sell-off was dampened by strong performance among resource shares, which have now gained almost 10% since the beginning of the year. South African listed property remains under pressure following its large decline in January while cash and bonds have done a good job to protect capital over the short term.

Consumers are reminded on a monthly basis that inflation has been kept within the Reserve Bank’s target range of between 3% and 6% for most of the past decade. Employers also love to point this out during annual wage increase discussions. Why is it then that a lot of us feel like our household budgets are getting trickier to balance when prices are not rising that much?

Kevin Lings, Chief Economist of STANLIB, shed some more light on the matter.

According to Lings, South Africa’s consumer inflation rate has remained relatively well behaved in the nine years since the global financial market crisis, averaging a very respectable 5.4%. While the average is above the mid-point of the inflation target (4.5%), the inflation rate has been inside the target range of 3% to 6% nearly seventy percent of the time.

This is viewed as a successful monetary policy outcome by international standards, especially considering the volatility of South Africa’s exchange rate, as well as the impact of erratic weather patterns on agricultural prices. Understandably, all of South Africa’s credit rating agencies have flagged monetary policy and its success in controlling inflation as a key strength. Clearly the benign global inflation environment that has persisted since the global financial market crisis has contributed significantly to South Africa’s favourable inflation outcome.

Lings points out that this outcome masks a very significant divergence in the inflation rate experienced within key categories of consumer spending. In other words, each household could have had a very different inflation experience over the past nine years depending on their specific spending patterns.

Some components of the SA inflation basket have experienced extremely low inflation, or even deflation, since 2009. These stand-out categories of consumer inflation that have assisted the household sector during the past nine years, are for example the purchasing of telecommunication equipment (including cell phones) which has recorded annual average deflation of a massive -15.4% since 2009 (this has been a global theme as technology advances and older cell phone models are discounted).

On the other end of the spectrum, the inflation rate for some essential services has risen very dramatically in recent years, well above the inflation target and well above the growth in household income. In that regard, one of the fastest rising areas of services inflation is the cost of medical insurance, which according to Statistics South Africa, has risen by a very substantial annual average of 10.2% over the past nine years. Strangely, this increase is well in excess of the average annual rise in the main underlying medical costs, for example doctors’ fees (7.1%), dentists (6.2%), and hospital fees (6.0%), suggesting that shareholders in medical insurance companies may well have benefited from this trend. 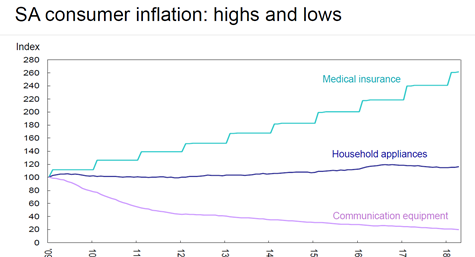 Other areas of consumer spending that have experienced relatively high inflation, include electricity (annual average rise of 12.3%, largely driven by Eskom’s need to adjust its pricing policy), water (average of 8.7% a year, despite a drop-off in water quality and supply), and primary and secondary education (8.9%). Many of these price pressures reflect either infrastructural backlogs, a lack of competition, or a widening of the gap between the public and private provision of essential services.

While there is no intrinsic reason why South Africa cannot achieve a lower average inflation rate, it seems clear that achieving this outcome is not entirely dependent on the level of interest rates. Instead, there has to be a focus on increasing competition as well as deregulating key areas of the economy in order to allow for more competitive prices and improvements in productivity, then using these gains to drive inflation expectations lower.