Global economic activity remains strong but less balanced than earlier this year due to a reduced synchronisation of growth rates across the developed world. According to RMB Global Markets, geopolitical risks have intensified with the possibility of a full-blown trade war threatening to derail global growth. We’ve reported before that this is far from a certainty, but President Trumps timely and untimely tweets about trade tariffs have certainly not helped to boost market sentiment. A slowdown in Chinese demand has had a knock-on effect on commodity price growth (which has slowed) and imposed a firm ceiling on most prices. Global monetary policy remains broadly accommodative, despite gradual policy normalisation by the US Federal Reserve. However, tighter monetary and financial market conditions, particularly across the emerging market universe, could compel central banks to progressively hike interest rates in what is essentially a weaker economic backdrop in these regions. The overarching risk to the 2019 growth forecast is the US economy potentially overheating, which could force the Fed to overtighten policy in response to demand-led inflationary pressures.

Emerging market equities have taken a hit in the last several months and, to some extent, this has been blamed on currency weakness in several G20 economies (Argentina, Brazil, Russia, South Africa, and Turkey) and the threat of trade war that we’ve mentioned above.

Last month’s US/Mexico trade deal opens the door to a renewed, trilateral NAFTA (North American Free Trade Agreement) which would hand President Trump a “victory” ahead of the November mid-term elections and greatly reduce trade tensions across the world. Any such outcome would release the coiled spring represented by the deeply oversold emerging equity markets and coupled with the significant valuation discounts they now offer, these markets could surprise to the upside towards the end of 2018.

The rand had its worst month in over five years as emerging markets came under pressure due, predominantly, to the sharp sell-off in the Turkish Lira. Granate Asset Management reports that while the trigger to the sell-off of the Lira was trade and political tensions with the US, its crisis have more to do with the longer-term deterioration of economic fundamentals in Turkey, largely linked to growing political interference in the economy – particularly the independence of the central bank.

While the Turkish crisis did pose risks to emerging markets (including South Africa) prior to the end of the month, there was no domestic economic data that justified the large sell-off of the rand. Headline catching announcements (linked to land ownership) by government, sensationalised by the press, added further volatility to the rand.

Early in September, Stats SA, however, announced that South Africa’s GDP declined for a second quarter in a row which pushed the country into a technical recession (i.e. two consecutive quarters of economic decline). This caught many economists unawares and caused sharp declines in the local currency against the US dollar in particular. Previous episodes of similar rand weakness were usually (and eventually) followed with a period of rand strength. We don’t think it will be different this time, even if the rand is only moderately undervalued at these levels.

Local equities were the best performing domestic asset class in August (+2.3%) with the resource sector benefiting from a currency depreciation which was larger than the fall in the price of South Africa’s major export commodities. Domestic bonds sold off (-1.9%), underperforming all other domestic asset classes, as emerging markets had their worst month in almost two years and foreign investors resumed their selling of South African bonds.  The listed property sector had a stronger month (+2.1%), arguably off a much lower base, after its decline from the start of the year. This followed a bounce in the price of the Resilient group of companies.  Global equities gained 0.8% in US dollar terms during August, with further divergence between developed (+1.3%) and emerging markets (-2.7%, all in USD). These returns were significantly boosted for South African based investors as the major global currencies gained more than 10% against the already battered rand.  The global portion of multi-asset funds have contributed to the average low and high equity funds delivering decent returns over the last quarter and outpacing most (if not all) local asset class returns.

The emerging market crisis gathered momentum in August, with the currencies of both Turkey and Argentina weakening by over 30% against the dollar. Investors with a focus on South Africa are rightly concerned about contagion risk as we have seen broad emerging markets being tainted with the same brush when one or two of them experience significant crises. In this instance, the economies of Turkey and Argentina are at the epicentre of the crisis, given their elevated foreign currency debt levels, but yet again it seems fear has spread to other emerging markets.

It has been well documented that South Africa is not without its own economic troubles, but according to asset management firm ClucasGray, the extent of the rand weakness belies the true fundamentals. The rand has now weakened by over 15% in the three months to the end of August and continued its slide into September. The chart below shows the level of vulnerability that certain economies have by virtue of their foreign debt obligations and foreign funding requirements. Whilst South Africa is not completely immune, the chart does highlight how much more vulnerable the likes of Argentina, Turkey and Chile are. 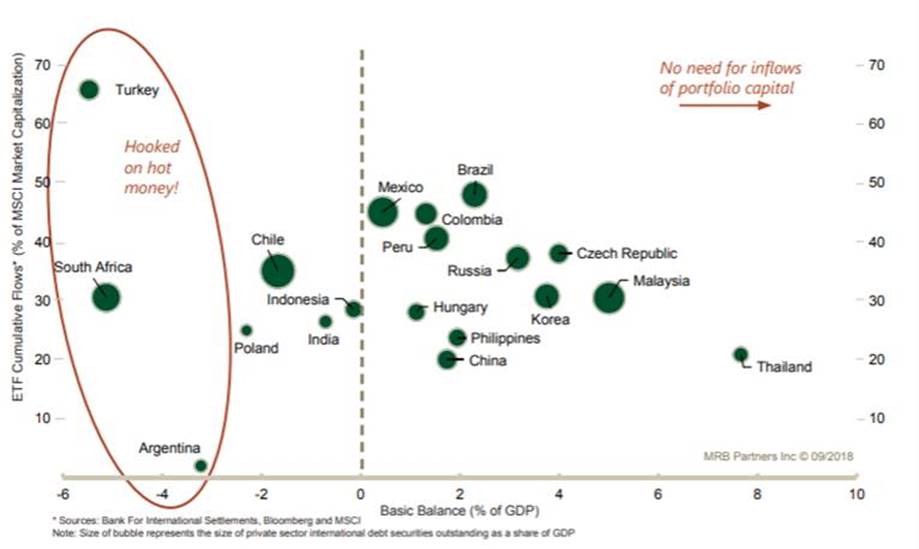 As evidenced by the chart below, the FTSE World Equity Index has outperformed the JSE in dollars by over 30% since the beginning of the year. To contextualize this move, the 30% relative outperformance is now as bad as the two previous emerging market crises since the 2008 global financial crisis, which includes the 2015 global “nominal recession” and in South Africa culminated in the infamous events around “Nenegate” in December 2015.

Recent developments have proved disconcerting – a currency crisis brings with it numerous unwarranted complications. We have been here before, and whilst no-one can lay claim to any foresight as to when things will improve, by actively allocating across asset classes, sectors and underlying companies, we believe we will look back at these times as having provided investors with attractive opportunities.